I came across a screen shot of my very first website. Yep. I designed it myself with SiteSpinner. A cool little software program that helps those unfamiliar with coding. It was WYSIWYG type and I used it for years. If you can read some of the small print, you will see I was a romantic suspense and paranormal writer. That’s paranormal romance writer by the way. 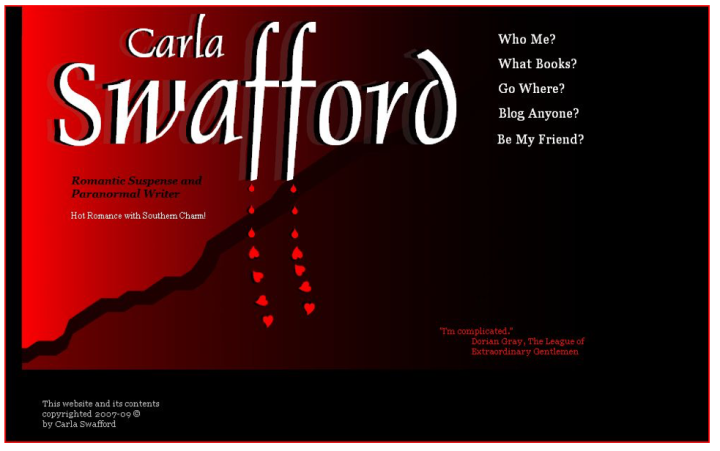 One day, I hope to pull out one of my paranormal romances and rewrite it and see if someone else likes it besides myself.

If you’re wondering, I wrote eleven books before I sold my first one. It was actually book number ten, my second romantic suspense, that Avon Impulse (HarperCollins) published. The first two books I ever wrote need to be thrown out, and only the plots used. One was a historical romance set in the Middle Ages. The next was a romantic suspense, not spy or assassin like my Circle books, but a former DEA agent (heroine) recuperating from her years being undercover. During the operation, she became addicted to cocaine while she played the drug lord’s girlfriend and she screwed up even more. She’d fallen for him. After putting him in prison, and length stay in rehab, she came under investigation. The special agent (hero) investigating her begins to have feelings for her. The drug lord escapes prison and troubles ensue.

No. I haven’t read it in years, but I still remember the plot.

October is a good month for me.  My first book, Circle of Desire, was published October 18, 2011, and on October 14, 2014, I agreed with Loveswept (Penguin-Random House) on a two-book contract. (Those books came out in 2016.) It was a mostly lovely experience I will never forget. The best part was joining forces with my agent, Emily Sylvan Kim, Prospect Agency. Love her!

So far, I’ve published 10 books.  All of them can be found at most major booksellers’ websites. Only one was from my pre-published days (yep, my debut book). So I guess you could say, I have a good stack to pull from when I have the time.